It’s interesting that Colin Kaepernick’s newest ad with mega-partner, Nike, shows him looking into an inanimate camera and saying “Believe in something, even if it means sacrificing everything.” It almost sounds as if Kaepernick is speaking to real everyday heroes: police officer, firefighters, and military personnel, but he isn’t. Kaepernick is addressing those who, like him, wear pig-like cop socks meant to belittle the brave men and women who truly know what it means to sacrifice everything in the belief of something greater. Of course, Kaepernick said in an interview that the socks represented rogue cops who taint law enforcement in general, but we know better. 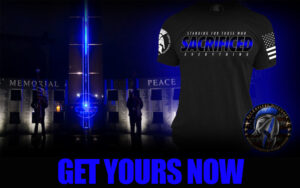 Kaepernick’s base represents hatred for all law enforcement personnel, for the rule of law, and most importantly, the clear majority of everyday citizens who keep the thin blue line taut. Not to sound cliché, but if there’s one thing that Black Lives Matter movement does right is that they don’t discriminate. They dislike all cops equally, which is ironic at best. A group that advocates equality yet judges an entire profession based on the color of our uniforms. When Black Lives Matter protesters chant “pigs in a blanket, fry them like bacon,” they don’t stop to say, “well, let’s only fry the bad ones.”

While the mainstream media will have the do-gooders of America believe that Kaepernick stands against police brutality and that it’s patriotic to kneel during our Nation’s anthem, it’s merely smoke and mirrors act, perpetrated by those who don’t know what real sacrifice is. Jay-Z, Serena Williams, Meek Mill have all come out in support of Nike and their decision to make Kaepernick their most recent sports martyr.

Gino Fisanotti, a vice president for Nike, calls Kaepernick “one of the most inspirational athletes of this generation, who has leveraged the power of sports to move the world forward.” Fisanotti’s choice of words should concern all Americans, as it not only exemplifies our misguided belief that sports athletes are the summit for our nation’s youth to look up to but the fact that powerhouse Nike feels justified in shoving their beliefs down our throats just because they can.

Whether this will prove to be a smart move for Nike Inc., only time will tell. The truth is, we are all social warriors, and the best way to create change within a capitalist society is to speak with our wallets and not just our hearts.

UPDATE: As of 4:30pm on September 4, 2018, Nike Inc. reports shares have fallen nearly 3 percent since Kaepernick’s newest Nike “Just Do It” ad resulting in a 3.5 billion dollar loss.