While the #metoo movement rages on with no end in sight, a word of caution to those who blindly support the FBI probe into Justice-select, Brett Kavanaugh. Law enforcement officers should feel extremely concerned that any group in society feels they are entitled to unequivocal belief solely because of their gender, race, ethnicity or sexual orientation.

Those within the feminist movement appear hell-bent on creating a culture that aggressively demands female accusers ought to be believed at face-value with little corroborating evidence if any to substantiate their claims of sexual misconduct against another. Proof, not allegations, has always been the cornerstone of the criminal justice process, a system founded upon a series of laws and amendments afforded to all, including probable cause, due process, and most importantly, the presumption of innocence.

When asked, many law enforcement professionals noted that based on the evidence, or lack thereof, and the glaring inconsistencies with Dr. Ford’s sworn testimony before the committee, they wouldn’t have enough information to draft a warrant, much less talk a judge, like Kavanaugh, into signing one. It seems those on the other side of the aisle have already made up their minds: that Kavanaugh is guilty of the crimes he is being accused of, which is yet again, a slap in the face of modern-day policing.

What’s happening right now in politics isn’t a left versus right thing. It’s not a political thing at all, although it’s most certainly being abused for that reason. What it is, is a blatant omission of the Fifth and Fourteenth amendments that guarantees everyone under penalty of law equal protection regardless of age, sex, race or wealth. Americans cannot once again become complicit in the creation of a new oppressed class – men.

On September 25 of this year, Danielle Muscato (@DanielleMuscato), self-professed Civil Rights Activist and @RESISTpodcast host, tweeted “What would you do if all men had a 9 pm curfew? Dudes: Read the replies and pay attention.” Since hitting “tweet,” Muscato’s bigoted message has gone viral, and as suggested, the responses should be looked at, although not for the same reasons Muscato would like people to. @SlavGeorgiev, whose is presumably a guy, writes: “Ladies, in your answer, please include which position in low-level night shift maintenance you would prefer. Sewers, warehouses, roadworks, power lines, etc. Or would the people who do that now (>95% male) be exempt from such a curfew?” Muscato’s response – posting a Samuel L. Jackson meme from Pulp Fiction where Jackson says, “I don’t remember asking you a G**damn thing!” 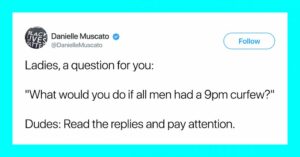 Daniel Rootes of @RootesRacing (also a guy), goes on to ask, “So when a male makes a reasonable point based on your premise in your world that’s a reason for an insulting response? I’d suggest your outlook needs adjusting just as much as some of the males you’re targeting.” Twitter responses from women directed at both @SlavGeorgiev and @RootesRacing include: “You have so totally missed the point of the discussion” and “What irritates me is how many people think this post is about actually putting a curfew on men. The question is what women would do if there were no chance of encountering a man in public after dark.”

Muscato’s most disturbing tweet further patronizes men by writing down her “Top 10 Tips for Staying Safe from FALSE Rape Accusations.” #4 reads, “If you’re going to exercise, make sure that you bring a friend, or even better, just exercise at home. Never go through a park alone. There might be a woman there who could accuse you.” Muscato wants to scare Americans into believing that all men are evil; viciously predating on innocent women every hour of every day and that if you’re a man (your ten-year-old son, your brother, your husband, or your father), you’re what’s wrong in the world.

What’s most sad is that America seems to have reached a point where it’s acceptable to demonize the growing up process. A process where making mistakes isn’t just ok but expected. Moreover, a time in a person’s life where they have a chance to overcome their mess-ups, sometimes serious ones, and to better themselves through hard work, personal growth and professional perseverance, setting them apart from those who had similar chances and chose not to.

While America has experienced its fair share of shameful moments in our nation’s past, it’s important to stand firm on the principles that guided our nation out of darkness. Americans must focus on the fundamental values that not only make our country great but the most objective in the world. Deceased orator, political theorist, and philosopher, Edmund Burke once said, “Those who don’t know history are doomed to repeat it.” The only question left to answer is – Is this what’s happening now in America and what will be done to correct the course of history?